Rohit Ghai, the co-founder and executive chef of the Michelin starred Jamaver in Mayfair, took inspiration from the famous Dabbawalla’s of Mumbai, the men who use Mumbai’s railway to delivery home cooked meals across the city. “This new restaurant, The Bombay Bustle, pays homage to this future and the people who have influenced Indian cuisine so much”.

The brief was to recreate the inside of an old Mumbai railway carriage in all its Art-Deco glory, in Maddox Street, central London. Firstly the existing interior had to be demolished and removed including relocating the internal stairs that linked the two floors. New beams and posts were installed to support the internal structures required to create the ‘railway carriage’ shape.

Lighting was sourced from The Favel Company near Venice, who specialise in creating unique and individual light fittings in bras - as one might expect on an old Mumbai train of the period.

The bespoke seating and furniture included booth chairs resembling that found on the trains, as well as chairs and benches that resemble the era. Every detail was fitted together to create this wonderful dining environment.

Finally a new kitchen was created using some elements of the old one but also introducing new bespoke fridges. 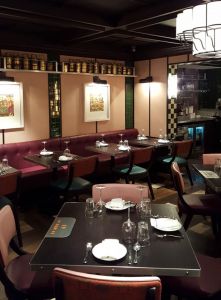 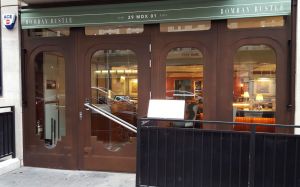