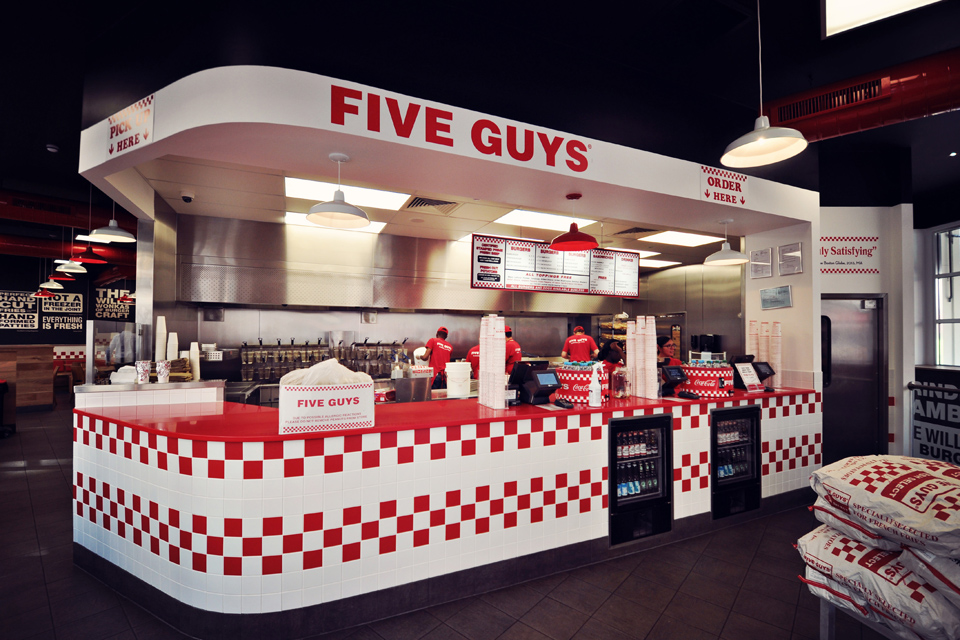 Fileturn has completed work on the latest opening of Five Guys the American burger chain, in the Gunwharf Quays shopping centre in Portsmouth. The opening comes five years to the month after we completed the fit-out of Five Guys’ first UK outlet in Covent Garden.

Fileturn was engaged to transform a 300sq.m vacant leisure space at Gunwharf Quays into the latest incarnation of this hugely successful restaurant chain. Five Guys has grown to more than 80 sites in the UK (100 including Europe), with Fileturn completing over half of these sites.

Working to the distinctive Five Guys design, Fileturn took possession of the site next to Hollywood Bowl as a landlord shell and was responsible for all alterations and fitting out including finishes, M&E, plumbing and HVAC installations.

To mark the fifth anniversary of Five Guys’ first UK opening, European Head of Construction & Design, Jonathan Cope, sent this message of thanks to all the companies that have contributed to the company’s success:

Today sees the 5th anniversary of our first store in Covent Garden, we have gone on to open over 100 stores in 4 different countries within those 5 years.
I truly believe this was made possible by the solid foundation you all gave us at Covent Garden along with all your hard work since then.
I just wanted to say a massive thank you to you all, you will always be the “originals”, here’s to the next 100!
Thanks again